The Truth About Botox Side Effects 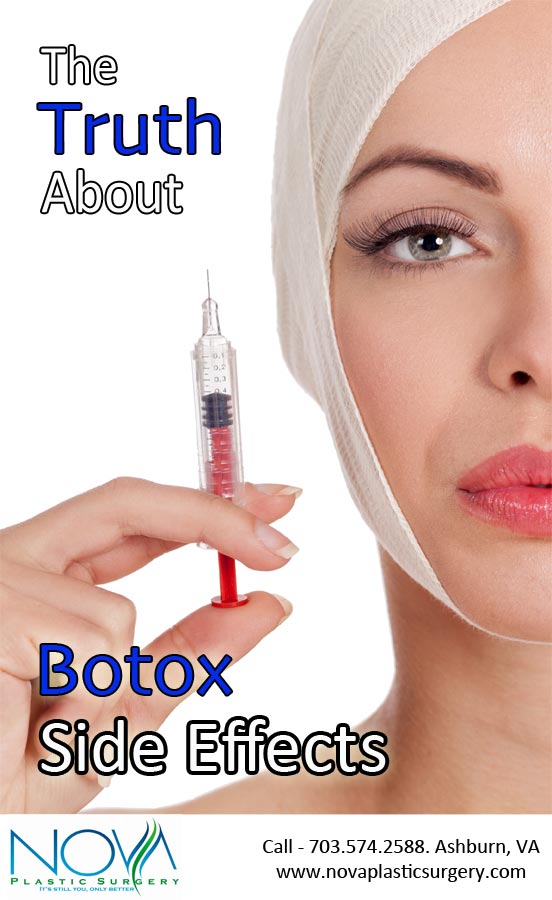 Youve been considering getting Botox for those wrinkles on your forehead that just seem to be getting deeper and deeper each day.
And though you’d really like to start getting Botox injections, friends have talked about some horror stories and have you running a little scared.
Botulism, death, droopy eyelids, looking plastic and fake is there really any truth to these rumors about Botox side effects or not?
The short answer is that most of it is hype side effects from Botox are extremely rare.
Were not just saying that because were a plastic surgery clinic, the research shows the true percentages (see them below).
And on top of that, any side effects are always reported to places like the FDA or CDC, and very few have ever been reported.
So thenwhat is the truth about Botox side effects?
The following information will reveal all the truths and scientific statistics and will put that question that’s hovering in your mind to rest: Do I have anything to be concerned about?

Side Effects of Botox

Side effects arent common but because Botox is a medication some people can react to it – though it is rare. By the time you read the information below, you will no longer have concerns about the safety of Botox.

If youve been considering Botox, one thing you may have heard of is botulism.
Botulism is a very rare illness caused by the bacteria toxins Clostridium Botulinum. Yes, this is the same toxin used in Botox injections but it is only given in small, diluted amounts, which is not toxic to humans.
Botulism is a life threatening bacteria. People are usually exposed to the bacteria via food, water, or soil – and it is a very rare illness. In regard to Botox injections, no reported deaths of botulism have ever been reported.
There has only ever been 4 reported cases of patients contracting botulism from Botox injections. All 4 cases were injections administered from an unlicensed medical physician, using an unlicensed Botox product – where subsequently the physician got sentenced to prison.
Apart from this incident, there have been no other reported cases of people contracting botulism in clinical situations.

Can Botox cause death?

Technically, yes it could. It is a medication and like most medications the dosage recommendations must be strictly followed meaning, you take too much of any medication and you can overdose.
However, there have never been any reported cases of death from clinical use of Botox.
According to research, the estimated lethal dose is 2500-3000 units. A typical clinical application of Botox varies from 4 to 20 units for cosmetic purposes, up to 300 units in some cases or for therapeutic purposes.

Pain is generally minimal for most people. Applied with the right technique, your Botox consultant usually pinches the area and slowly injects the Botox, which reduces any pain or discomfort.
The medication is injected into the target muscle using very small, fine hypodermic needles. If you do experience any discomfort, it is usually momentary and fades very quickly.

The most common side effect of Botox is bruising from the injections. Bruising in the area around the eyes is the most common but still only occurs in 6-25% of people. If you do experience bruising, it should fade after a few days.
To minimize bruising and bleeding, medications such as aspirin and non-steroidal anti-inflammatory drugs should be stopped at least 10 days before treatment.

Some patients may experience headaches that last 24 to 48 hours after the injections. However, this only happens in just 1% of people.

Eyelid drooping occurs in 5.4% of people, which resolves itself in 2-4 weeks.
By choosing a highly trained professional to administer your Botox injections, the risk of eyelid drooping is minimized. Because the area around the eyes is so sensitive, the angle and depth of the injections is very important, which is why you only want to get Botox from an expert.

Serious side effects from Botox are extremely rare. However, more serious side effects include seizure, flu-like symptoms, pain in the eyes, trouble with your vision, and trouble swallowing. If you have had Botox treatments and are experiencing these symptoms, you should contact your doctor immediately.

The most common adverse effects are local pain, infection, inflammation, tenderness, edema (swelling), erythema (superficial redness of the skin), bleeding, and ecchymosis (discoloration of the skin resulting from bleeding underneath that is typically caused by bruising).
These common side effects are temporary, short-lived symptoms and usually occur because there is a needle being penetrated into the skin and facial tissue. It is important to note, that if you choose a highly qualified professional, these side effects are often minimized because of proper injection technique.

If you go and overdo your Botox treatment – injecting all over the place and injecting too much – then you might come out looking all smoothed out, plastic and fake.
If your Botox consultant goes overboard, you get a very smoothed out shiny look, and yes it definitely can look plastic and fake, which is why you dont want to overdo it!
Instead you want to achieve a natural look that looks just like you only better. You want it to be almost so natural that it leaves your friends wondering has she had Botox or not.
To get this kind of result, its always better to get less than you think you ‘need,’ then come back for a follow-up consultation if you decide you want just a little more.

Botox is considered a safe drug

Botox is an FDA approved drug, and overall very few people experience side effects – as shown in the statistics above, it is only a very small percentage. Overall, very few people experience side effects.
Botox has been used for the past 20 years for cosmetic treatments and has become one of the most popular cosmetic procedures worldwide. In fact, it is one of the most extensively studied medical aesthetic treatments and is approved for cosmetic use in 78 countries.

For various different reasons, choosing a highly qualified professional to administer your Botox injections is very important. It not only assures you achieve a natural look but helps minimize any side effects and risks as well.